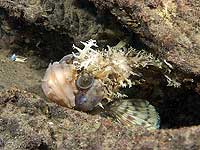 Indianola Wreck is a little like winning a three for one scratch off Lotto ticket.  We found three wrecks all piled together on one little spot of sand, about 100 yards southwest of the end of the Indianola Fishing Pier.  The larger wreck on the bottom looks like it was once a 40', twin screw pleasure craft.  Rumor has it that the boat was sunk for the insurance money.

Since the sinking, someone has added a couple of smaller, fiberglass, dingy sized wrecks to the wood hulled cabin cruiser.   The pile of wrecks lie in about 45 feet of water, and make a nice second dive after running through agate pass.

Both of the propellers and rudders are still in place on the larger wreck, as well as the large batteries, stuffing boxes and propeller shafts that once pushed this boat around Puget Sound.  We spotted a few rather skittish cabezon hiding beneath the wreckage.

At the time of this writing, there is a crab pot that is stuck underneath the wreck and although the line is caught in the wreck pretty good, the buoy is still attached, which makes the finding the wreck pretty easy.  The sad thing about the crab trap is that it still contains the skeletal remains of a harbor seal that was used for bait by the tribal fisherman that snagged it on the wreckage.

Location:  100 yards southwest of the end of the Indianola Fishing Pier